9 things to know about Narcissists

9 things to know about Narcissists

Narcissists can make you feel crazy. Before you have tools to identify and understand them, you can fall prey to their unaware antics ~ especially if you were raised by one and subconsciously seek them out. 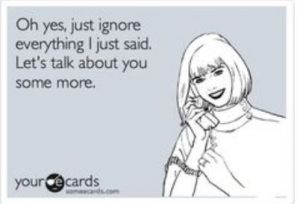 Here are 9 things to help you recognize, protect against, and have compassion for this personality disorder:

1. They often don’t know they have it.
Narcissists really can’t hear you and truly don’t think it’s them. The idea that they are always right is so needed and their ego so fragile, it’s too damaging to hear anything to the counter.

2. They will always find a way to make it about them.
Conversations circle back to them. Only their feelings matter. While they struggle to feel empathy for another’s plight, they get offended and possibly punishing should you not see the severity of their circumstance. Their agenda, no matter how damaging to your world, are all they can see.

3. They justify whatever is best for them
Narcissists make most of their decisions based on how they feel about something. If they’re bored or depressed, they want to move or end the relationship or start a new business. They look to something or someone outside themselves to solve their feelings and needs. They expect you to go along with their “solutions,” and they react with irritation and resentment if you don’t.

4. They feel very alone and can’t connect
Because of their lack of empathy, and constant need for self-protection, narcissists can’t truly love or connect emotionally with other people. They cannot look at the world from anyone else’s perspective. This makes them emotionally needy.
When one relationship is no longer satisfying, they often overlap relationships or start a new one as soon as possible. They desperately want someone to feel their pain while having little ability to respond to other’s pain or fear.

5. They are terrified of not being enough
Their brain has created this coping mechanism of delusions of grandeur that can be quite dangerous to dispute. Because they need this image of themselves to feel real, anyone that disputes their over inflated self should duck. They have no sense of humor when the joke is on them.

6. They can be quite charming
They are tap dancing for their survival and they need your positive mirroring of their self image to continue on. This makes them quite motivated to gather the likable skills necessary. They know to offer you something as they reach out with an ulterior agenda.

7. There are varying degrees of Narcissism
One can have narcissistic tendencies or have a full blown disorder. I rank it based on the inclination to make it about themselves and the degree of delusion.
If they only keep people around that are their clapping audience and can’t see why one would ever choose what is best for everyone if it conflicts with what is best for them, you’re likely dealing with a narcissist. They can’t fathom anything being more important than their needs.
Trauma can spark a pain-based self absorption in otherwise good people. This is almost it’s own category. This one I call ‘pain-based narcissism’ and I believe it can be reversed depending on how severe and how long ago the trauma happened.

8. Trigger a Narcissist and get ready to apologize
…and swear to never do it again. Be ready to feel like you’re talking to a wall that quickly gets defensive and angry. Full blown Narcissists don’t have a concrete sense of self and usually can’t self soothe well so if you’ve accidentally triggered their protection system, fix it ASAP and release expectations they’ll apologize. They will only escalate the fight and crucify you for daring to bring up the idea of their imperfection.

9. Confront a Narcissist and expect to get ‘Gas Lit’
Gas Lighting is a maddening tactic that turns any fight on their adversary into a way they can win at all costs. It’s called “gas lighting” and truth need not apply. It’s about winning, not reconciling and the facts are not important. Manipulation and bullying tools get employed to throw you off. We’re have a very public political example to study.
They’ll yell louder and bring up non relevant damning details to try to throw you off the main point. You’ll feel like you’re going crazy and your nervous system will be assaulted and wildly triggered. If you’re looking through a healthy lens, you may make the mistake of trying to include fairness or logic to the equation.
This is a mental illness and normal paradigms do not apply. Gas lighting is quite damaging and can undermine your view of reality so get away from a Narcissist that does this if you can.

We also, unfortunately, have a greater chance of developing tendencies ourselves if we were raised by a Narcissist. Self awareness of your tendencies is a great way to know you’re not a full blown Narcissist.
Narcissists have a protective mechanism that keeps them from acknowledging any personal flaws. It’s too painful for them. If you can actually see your self absorbed tendencies, you have a real shot at healing them.

This author hasn't written their bio yet.
admin has contributed 15 entries to our website, so far.View entries by admin

Your email is safe with us.

This error message is only visible to WordPress admins

We're currently offline. Send us an email and we'll get back to you, asap.

Experience something completely different. The most powerful theme ever. Button Example